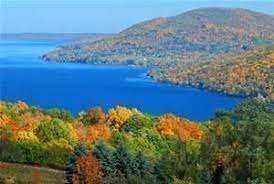 The Canandaigua Shores project, a 116 unit housing project offered for rent between $ 1,800 and $ 2,000 per month, as well as 12 two and three bedroom townhouses, recently requested an extension of its planning project in Canandaigua City Council, but the City Council voted to deny the extension. The proposed project sits on undeveloped land owned by Carol Eiffert and is south of Finger Lakes Community College, on the hill on the east side of Canandaigua Lake, across from Otetiana Point.

Under the city’s zoning law, a developer has 180 days to get planning council approval on a project plan, and so far the developer, ATL Contractors, has failed to to do so or to convince the town planning council to vote approval on the project, and therefore asked the Canandaigua city council for an extension of the 180-day limit, but this extension was refused. In public hearings attended last July, neighbors and others voiced their opinion that clearing the undeveloped land south of Finger Lakes College for development would result in excessive runoff to Lake Canandaigua, as well. that more traffic congestion on Lakeshore Drive. and Eastern Boulevard, and near Finger Lakes Community College. Some also felt that the project design was ‘barrack-like’ and unsightly when viewed across the lake, and objected to the removal of vegetation currently on the undeveloped land and lack of trees in the new development. A petition signed by 1,000 people was presented to the board of directors, and representatives from the Canandaigua Lake Association and the Canandaigua Watershed Association spoke out against it, citing the “health of the lake” due to the runoff and water. unsightly of a densely compacted subdivision on the hill on the east side. .

The developers have revised the plan to address concerns presented at the July 13 meeting and will tentatively present revised plans to the Canandaigua Planning Council at its November meeting. But if they can’t get planning board approval quickly, within the 180-day timeframe, they may have to start all over again. Opponents of the project have petitions against even the revised site plan to present to the board, still claiming that a project of this magnitude across from Otetiana Point will forever change the “rural character” of the region, will affect the health of the lake and the 400-600 or so, the additional cars in the area as a result of the housing project will cause more traffic and congestion for an already occupied and congested area.

The developers cite the need for affordable housing in Canandaigua and the significant benefit to the tax base that the project will have by keeping Canandaigua’s taxes lower, to continue the project. The new plans still have roughly the same number of units as the original showcased last summer, but changes have been made to address drainage issues and soften the look of the development, with a community building with a fitness center, playground, crosswalks, bike paths, and a dog park having been added.

Although city council refused to extend the 180-day limit to get preliminary site plan approval, developers still have about a month to get that approval. In the meantime, the planning board has acknowledged that the plan has been significantly revised and welcomes comments on the revised plan from other stakeholders such as the Finger Lakes Community College and the Canandaigua City School District before. to vote on the approval or not of the project.

At this time, the project is not on the agenda for the October 26 planning council meeting; however, the project vote may well take place at the next Canandaigua Planning Council meeting in November. Site plans and the revised September 21 plan can be found under â€œEiffert / ATL Entrepreneursâ€ on the Planning Council website page at http://www.townofcanandaigua.org/page.asp?id= 111.